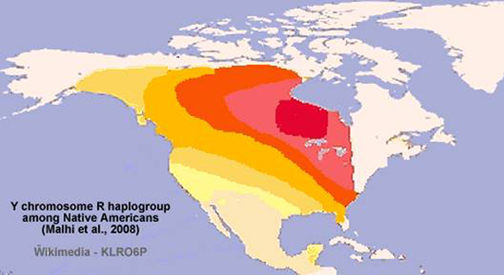 The map shows the distribution of Y-chromosome haplogroup R1b among Native* American populations of the Western Hemisphere.
.
* We have learned that millions of people, who came from the east side of the Atlantic, used hundreds of thousands of crew-rowed boats to remove a billion pounds of copper from Lake Superior.  So the word “native” is misleading.  I will omit “native” and replace the word by [].
.
(There is zero occurrence of R1b south of the Yucatan).
.
The people from the east side of the Atlantic waited out the hurricane season in the Yucatan.  Then they launched into the Gulf Stream to float to the Azores.
.
The map is also complete for all of haplogroup R because all [] American R that has been found is R1b.
.
On its face, this distribution was profoundly disturbing to the standard model of American settlement, for a number of reasons.
It suggests that a [] American genotype had some barrier to its diffusion southward, and the pattern of distribution is inconsistent with radiation from Bernicia.
.
“Radiation from Bernicia” is a 17th century MYTH created by the English to divert attention from the fact that Americans, who came from the east, spoke Norse.
.
This evidence confirms that Bernicia is a MYTH.
.
“Barrier to its diffusion to the southward.”  The “Great American Desert” might have been that barrier.
.
In the 18th century European civilization failed at the Tree Line for a Century.
.
But another factor may have been that, when the people from the east side of the Atlantic reached the lower Mississippi (below Poverty Point) they were loaded into the boats and eager to return to the folks in the east.
.
It suggests some "landing" of a founding population in Hudson Bay Christian Sea and the distribution is too wide to explain away as some aberrant founder phenomenon.
.
The RIB carriers were the Norse, who were the residual Sea People of the Copper Hauling era, 2,200-1,200 BC.  They traveled by water and lived on seafood and animals that consumed seafood.
Distribution through out the north lands would have been a normal sequence of events.
.
Because of those unsettling   implications, [?] there were widespread attempts to attribute the occurrence of R1b to European admixture, presumably caused by English traders colonizing Hudson Bay. the Christian Sea.
.
The Norse were using crew-rowed boats in the Christian Sea [a.k.a. Hudson Bay] six centuries before the English Invaded.
.
One still finds many careless analyses that pass off the whole thing as presumed admixture.
But admixture is now ruled out as an explanation on many grounds:
.
1. Why would such traders only bring Y-chromosome R1b and not any other European genotype?
.
Because after Agriculture became inportant for food and required warfare, the European sphere became divided into the LAND people**  and the residual Sea People (Baltic Sea, Iceland, Greenland, and North America)
**(ROME is one nasty example of a LAND culture. ROME invaded England.  Those people became LAND advocates.)
.
The Sea People were still rowing boats and trading throughout the Pan North Atlantic Culture.
.
If there were such a distribution pattern caused by Hudson Bay traders,  residual Sea People then we should [NOT] find similar distribution patterns for many other European genotypes. but There are none.
.
2. Why don't other European Y haplogroups appear in these populations? Eastern England has a frequency of R1b of only about 45%. Why did the traders Sea People not bring other haplogroups, specifically R1a?
.
The confrontation between the Sea People and the LAND people was long (maybe three thousand years or more) and apparently bitter (Carthage?).   In Europe and Asia Minor the LAND people "won."  They drove the "uncontrolable" Sea People and their Shore Language out to sea.
The DNA patterns of Sea People and Land people may have diverged.  The residual of the Sea People in Northern Europe may have strengthened the Sea People population in America.
.
.3. How did admixture in remote Hudson Bay Christian Sea radiate all the way to Alaska, Oregon, Florida, and the Yucatan?
.
By Sea People rowing (or paddling) boats.  It took only three summer months to paddle the width of the Mississippi basin.
.
There were no known [] Migrations from Hudson Bay the Christian Sea to these far destinations in the historic period.
.
The LENAPE MIGRATION is evidence that your statement is FALSE.
.
The [] population around Hudson Bay the Christian Sea was always relatively very small. That population would not have been capable of spreading a genotype so widely in only a few centuries.
.
Small “sleep over” villages do not measure the traffic paddling past them.  A traveling canoe full of boatmen, who slept under the inverted boat, would be in another village sixty (60) miles away on the next night.
.
4. If admixture from traders (four thousand years of people from the east side of the Atlantic rowing past) had such a powerful effect at Hudson Bay,  the Christian Sea why don't we see similar effects on [] groups from the much larger degree of admixture that occurred all along the eastern seaboard, from the Maritime Provinces to the Caribbean?
.
That is a GOOD question!
.
Roger Williams wrote the "Key to the Language of the Americans" so linguistic professors would know that the Americans were speaking Norse in 1741.
.
Why has NO linguistic professor published that information?
.
The Norse Language was there when the English invaded.
.
The Catholics, who spoke Norse had built at least seven churches along the coast BEFORE the Enlish invaded.


Why is the R1B DNA NOT dominant in the admixture?
.
The scientific community has been known to throw away DNA samples with R1B, because the researchers thought the sample had had been contaminated by Europeans.
.
We need to determine if the bad DNA procedure has profoundly disturbed the conclusions.
.
Why were [] groups only spreading admixed genes that came from one remote location?

.
For one thing the Sea People on the east side of the Atlantic rowed through the strait to the Christian Sea (a.k.a. Hudson Bay) for four thousand years.

These and other considerations, including more detailed genetic analysis of R1b subclades rule out admixture as the cause of the R1b distribution pattern.
[??]
Instead, there is complete explanation for the distribution pattern, namely Algonquian  the Norse brought that R1b to North America
.
Reider T. Sherwin demonstrated “the Norse origin of the Algonquin language.”  Through out the rest of this article the word “Norse” will replace the word “Algonquin.”
.
Ancestors, and was spread in North America by [Norse]. The reason that the distribution pattern is densest around [Christian Sea] is that the [Christian Sea] is the only part of the map where the [] population was near 100% [Norse]. The percentage of R1b falls off in precise relation to the percentage of the [] population that was [Norse], and in relation to where [Norse] had influence.
Thus, the map serves as a stand-in for determining where [Norse] did have prehistoric influence even if they did not dominate the population -- namely the Mississippian Culture areas of the southeast down to Florida, extending to the Yucatan (where some [Norse] vocabulary entered Yucatec language).


This, of course, has a major implication: that [Norse] ancestors arrived in a separate migration from other North Americans, and with at least slightly different genetic forbears. That conclusion is borne out looking at all of the other [Norse] heliotypes, including mitDNA X and C, and Y- Chromosome Q, which I'll look at next.

Geoffrey Sea
Geoffrey and 1 other manage the membership, moderators, settings, and posts for Adena Core.
The blank space along the east coast is simply where no data was collected. There are virtually no Indian reservations left along the eastern seaboard, so no populations from which Native samples can be collected reliably. Those few communities that still do exist in that region have extremely high rates of admixture. So that are is just not included as part of the map.

All white areas means no data was collected.